The man who walked off his Parkinsonian symptoms visits VIC

$10AU
14 of 60 taken
Come and meet John Pepper at Hampton RSL (25 Holyrood St, Hampton, Melbourne, Melway's Ref 76E5) and hear how he walked off his Parkinson's symptoms. Ask questions and watch his demonstrations.

$10AU
9 of 60 taken
Come and meet John Pepper at Moorleigh Senior Citizens Centre (92 Bignell Rd, East Bentleigh, Melbourne, Melway's Ref 78A5) and hear how he walked off his Parkinson's symptoms. Ask questions and watch his demonstrations.

Let’s get the man who walked off his Parkinsonian symptoms to Melbourne on February 27 and 28, 2016.

In his best selling book “The Brain that Changes Itself” neuroplasticity pioneer Norman Doidge describes how a man walks off his Parkinsonian symptoms.

He discusses how his walking companion, John Pepper, was diagnosed with Parkinson’s disease, a movement disorder, over two decades ago. John first started getting symptoms nearly 50 years ago.

Today, John who is 81 years old, does not appear to have the classic symptoms of a Parkinson’s patient – no shuffling gait, no visible tremor when he pauses or moves. He does not appear especially rigid and seems able to initiate new movements fairly quickly. He even swings his arms when he walks. He has not been on anti-Parkinson’s medication for 12 years, yet appears to walk normally.

Since John, inch by inch, re-taught himself to walk, he has tried to pass on his story to others around the world who also suffer Parkinsonian symptoms in the hope that it may help them. He recognises that everyone is different with different symptoms but believes that there are some others out there where  he can make a difference to their lives. He has glowing acoloades from people he has helped from Dorset to Amsterdam.

See below an article from the Guardian newspaper in the UK seeing what Norman Doidge has to say about John’s journey.

In the press: The Guardian 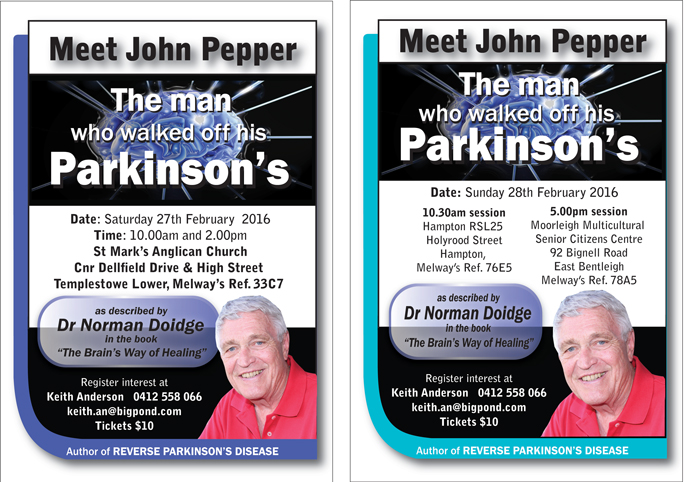 How will the money raised be used ?

John is lives in Cape Town, South Africa with his wife Jeannette.

We are looking to raise funds to cover the return air fares from South Africa to Australia in premium economy. Once John and Jeanette are in Australia they will stay with friends and people who organise any subsequent talks in Melbouorne on 27 and 28th February so that costs are kept to a minimum.

The cost is between $3,500 and $4,000. Some money will be raised by ticket sales on the door. We are working with ReadyFundGo to raise $3,100. This will be achieved if we sell all of our rewards or receive some donations.

This is is a unique one time opportunity to see John, ask him questions and see if anything may apply to your situation.

Recently in the UK 100 people turned up to an event in Bristol to hear John speak. After John’s UK visit many people have started to follow his example of fast walking and re-learning step by step.

For $10 – we are offering tickets to hear John speak at the a group event in Melbourne. There are 4 different sessions on offer. As follows;
Saturday 27th February at  10am or 2pm at St Mark’s Anglican Church (Cnr Dellfield Drive & High St, Templestowe Lower, Melway’s Ref 33C7)
OR
Sunday 28th February at either 10.30am at Hampton RSL (25 Holyrood St, Hampton, Melway’s Ref 76E5) OR 5pm at Moorleigh Senior Citizens Centre (92 Bignell Rd, East Bentleigh, Melway’s Ref 78A5).

For $100- we are offering a personal one hour session with John in Melbourne who can show you how he broke down and re-learnt the various components of walking.

How Else Can Supporters Help?

If you know anyone who has Parkinson’s symptoms or been diagnosed please tell them about the event in case it is of interest.

The event organisers do not make any promises but many who have heard John before have been inspired to follow in his footsteps.

$10AU
14 of 60 taken
Come and meet John Pepper at Hampton RSL (25 Holyrood St, Hampton, Melbourne, Melway's Ref 76E5) and hear how he walked off his Parkinson's symptoms. Ask questions and watch his demonstrations.

$10AU
9 of 60 taken
Come and meet John Pepper at Moorleigh Senior Citizens Centre (92 Bignell Rd, East Bentleigh, Melbourne, Melway's Ref 78A5) and hear how he walked off his Parkinson's symptoms. Ask questions and watch his demonstrations.