$1AU
52 pledges
Donate any amount you'd like to help the children and parents of Lynette Daley.

Update 18.06.16 : Wow! Such heartfelt support! Keep it coming so we can really make an impact – and keep on sharing this with friends and family. A film fundraiser in Brisbane and Melbourne has been added to the campaign courtesy of the Warriors of Aboriginal Resistance organisation. All funds going to The Lynette Daley Fund. Brisbane is sold out. Melbourne event details coming soon.

Update 13.05.16: Gordon Davis of the Lynette Daley Family has spoken with ReadyFundGo and is sincerely thankful for all and any support for this campaign for the family.

Lynette Daley was a once high-achieving indigenous woman and mother of seven. Lynette was tragically murdered and left for dead on the beach near her family home in northern NSW. It’s been almost five years, but her perpetrators remain unprosecuted.

Speaking publicly for the first time on the Four Corners program recently, her family has inspired thousands of Australians to get behind petitions and demand justice for the failure to prosecute the two men involved in her brutal death. 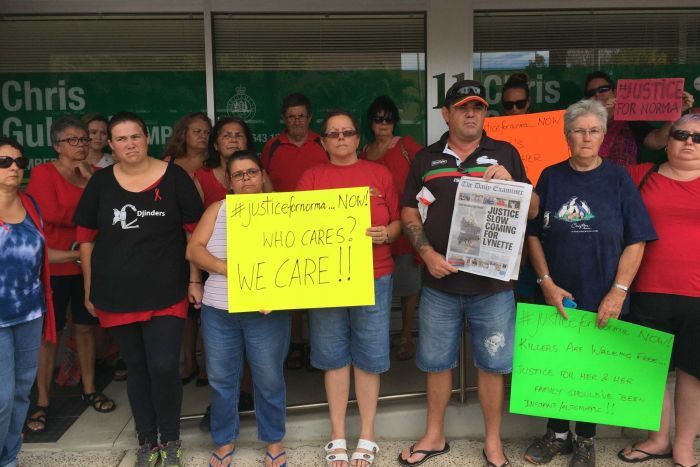 No amount of funding will make up the fact that a mother of 7, a daughter, sibling, friend was lost and of the injustice that her murderers remain free without prosecution.

But at this moment we also can’t ignore the emotional and financial hardship endured by her children and parents. 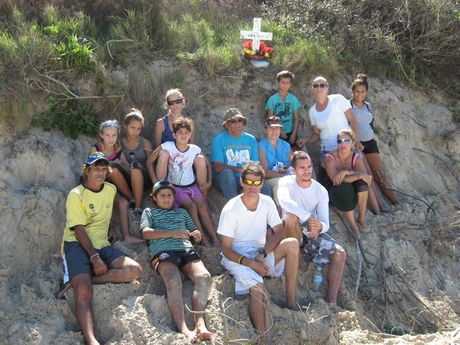 “Life is empty now,” she said.“We don’t celebrate birthdays, Christmas anymore. Life is not the same. It’s never going to be the same.”

Lynette’s parents Thelma Daley and Gordan Davis have cared for their 7 grandchildren on a small income for years.

While I too am a member of the public who watched the Four Corners program and don’t know the family directly, I would like to give the parents and children of Lynette every opportunity to heal, learn, grown and just BE without the hardship of financial constraint.  The least we can do is to give them a hand in getting along in life.

Funds raised by this crowdfunding campaign will go to a fund created for Lynette’s children and her parents to assist with costs of health care, education, living expenses and activities like sports, hobbies, birthdays and holidays – anything that might help make things a bit easier for Lynette’s family.

Please pledge or book tickets and show your support now.

You can pledge any amount you wish as well as attend upcoming film fundraisers!  Please remember to share with friends and family.

‘We are women of the collective WAR (Warriors of Aboriginal Resistance) group. After learning recently of Lynette’s tragic passing, WAR women in Brisbane have been propelled to provide financial support to her family left behind and make others aware of the tragic and horrific circumstance that surround her death. We have decided to hold a movie night in Brisbane on Saturday 25 June at 6pm, screening the 1998 Aboriginal film Radiance, a beautiful story featuring three Aboriginal sisters reunited for their mothers funeral. We only hope the proceeds can help to alleviate the pressure and burdens the family has endured these last 5 years. You are all in our thoughts.’

Radiance is a screen adaptation of Louis Nowra’s stage play by first time feature director Rachel Perkins. It’s a film that hasn’t entirely shaken off its stage origins, but somehow the emotional territory it embraces is powerful enough to make you forget anything but the fate of the three women at its heart.

Synopsis: Three sisters reunite after some years apart, for their mother’s funeral. Cressy (Rachael Maza), the eldest of the three, is a diva – an opera singer who is reluctant to visit the past and definitely doesn’t want to share it with her sisters. Mae (Trisha Morton-Thomas), has stayed behind looking after mum, and believes that Cressy hasn’t shared enough. Nona (Deborah Mailman), the youngest and the party girl, just wants them to all be one happy family. She may even help grow the family if her pregnancy test is accurate “¦ Deep and dark family secrets and personal conflicts start to unravel, but not all is gloom. See film trailer. 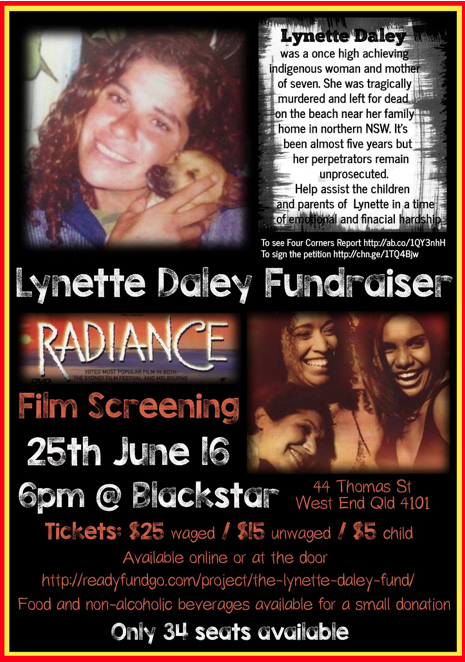 I am sure you have seen the news today.

The Lynette Daley Fund campaign is just a few weeks from ending.  This is a reminder to all our backers to keep up the IMPACT by continuing to SHARE the link to the campaign page on social media - https://readyfundgo.com/project/the-lynette-daley-fund/

A FILM FUNDRAISER event in Melbourne is also being organised in support of Lynette's family by the Warriors of Aboriginal Resistance organisation.  The film Radiance will be screened. Dates to be announced soon!

A Brisbane FILM FUNDRAISER has sold out - just a reminder it starts at 6pm on June 25th at at  the Blackstar (44 Thomas St. West End Qld 4101.

One comment on “The Lynette Daley Fund & Film Fundraisers”

Jeremy. Thank you for helping this family

$1AU
52 pledges
Donate any amount you'd like to help the children and parents of Lynette Daley.