$5AU
7 pledges
A raffle ticket to win our Christmas hamper.

Let's put a present under the tree

Blessed by an Elf

$25AU
12 pledges
Thank you for your donation!

Let's top up the stocking

Santa with a big heart

Jingle Bells - All The Way

12 tickets for the Christmas hamper draw

Three St Nick posters signed by the cast and crew

A special mention in the films final credits

St Nick is a short film that takes a modern and original angle on the santa/elf story. We all know what Santa brings into our houses, but what does he take away?

Is Santa a career criminal or a saint?  Is Santa being set up, or will an Elf expose him as a fraud?  Or is there another reality?  There’s only one way to find out – join us in getting this story to the world.  You’ll be supporting the next wave of Western Australia’s most exciting actors and filmmakers: our stories, told our way, in our voice.

Our rewards are fun and give you an opportunity to engage directly with the filmmakers.

Film has its many and varied expenses, we have most of them covered but not all, our crowdfunding will go directly to the following outlays. 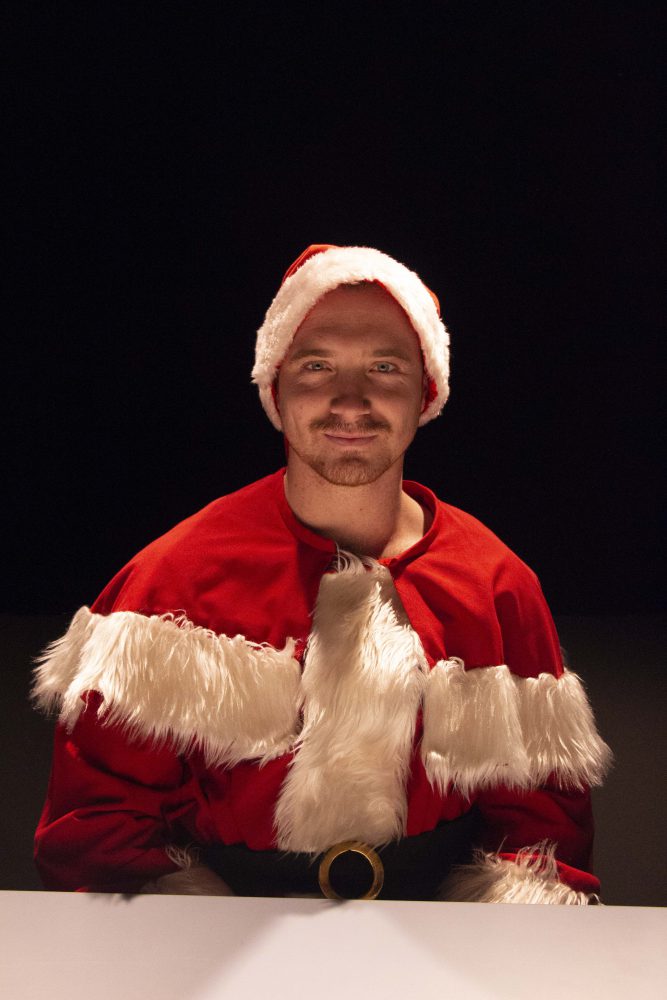 Justin is in his third year at WAAPA.  When he’s not acting Justin puts in cameo’s as a tradie, footy player and kick boxer. His acting roles include, Leaf Conniebear in ‘Putnam Spelling Bee‘; the Dentist in the ‘Little Shop of Horrors‘; and Ajax in ‘Our Ajax‘; Justin is one of those actors your eyes follow and certainly the man to re-write the Santa role. Look out! 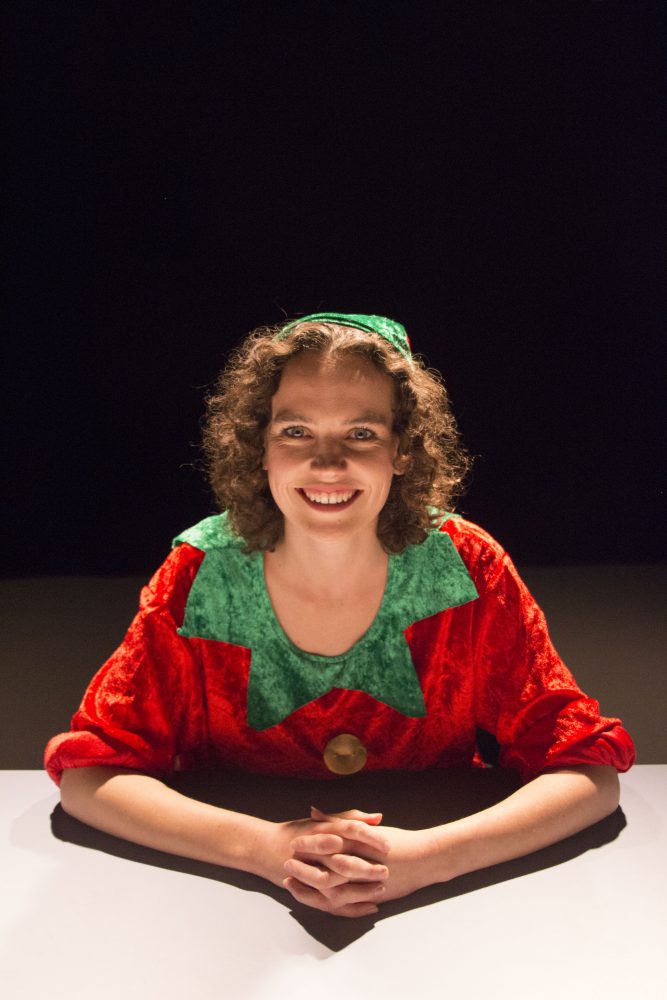 Lucinda is a NSW born actor who has performed in Sydney’s theatre scene since 2014, most recently with an adaptation of ‘Nosferatu: A Fractured Symphony.’  Locating to Perth, Lucinda’s WAAPA roles, include playing Benvolio in Shakespeare’s ‘Romeo & Juliet.’ Lucinda’s character faces multiple challenges, it’s the ideal role for this multi-talented actor. 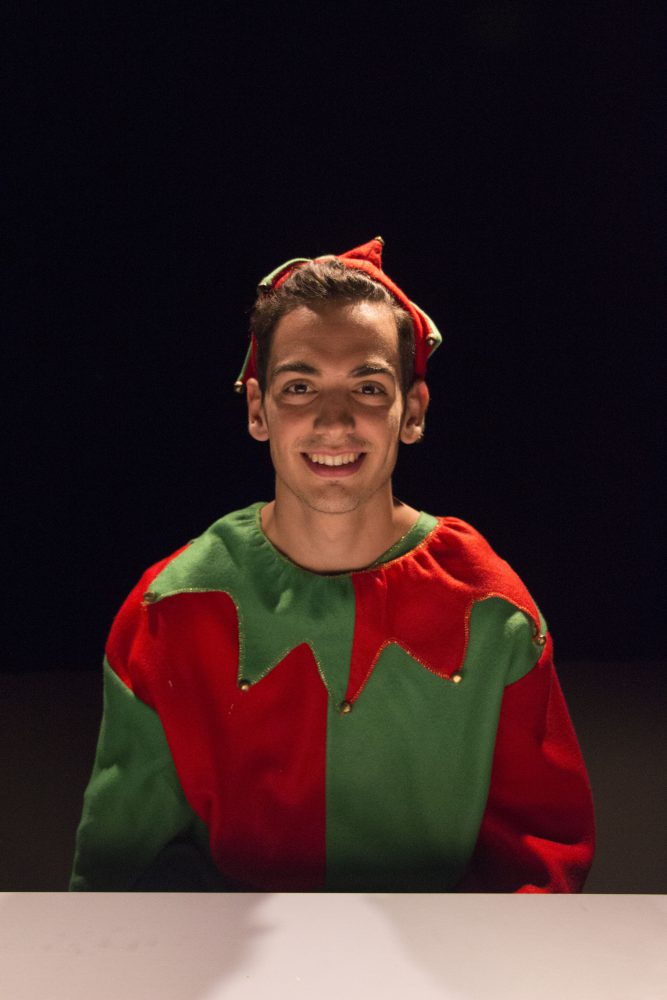 Jonathan Lagudi is an Italian-Australian actor born who began his acting training at WAAPA in 2017.  His stage highlights at WAAPA include playing Konstantin in Anton Chekhov’s, ‘The Seagull‘; and the titular role of Romeo in William Shakespeare’s, ‘Romeo and Juliet’. Jonathon has a maturity beyond his years and is an ideal fit to play a morally challenged Elf. 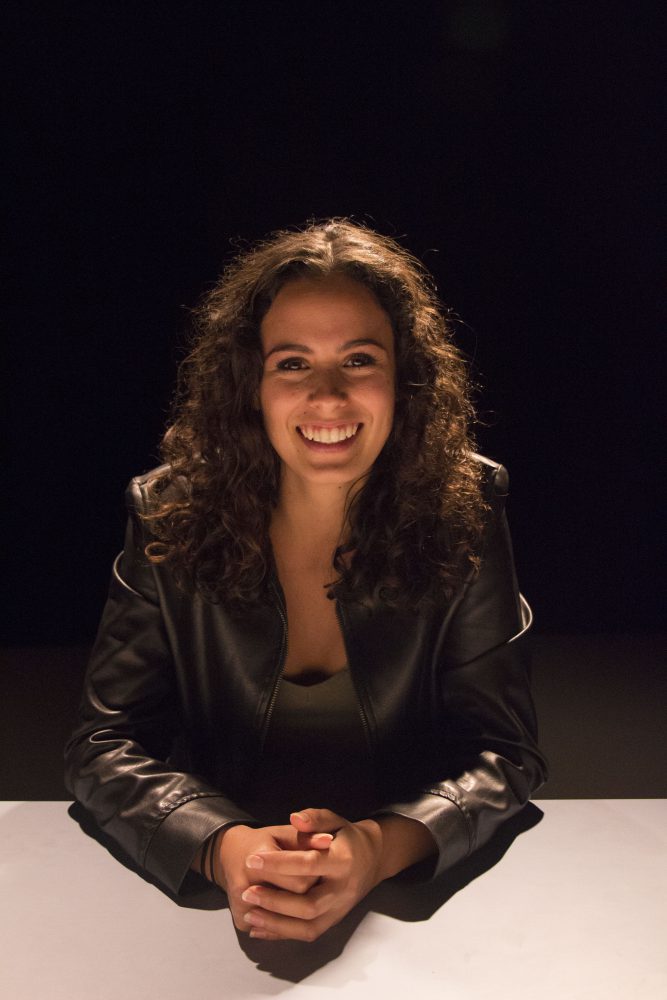 Camila Ponte Alvarez is a 21 year old Venezuelan/Australian Actor. Camila has played a variety roles of iconic roles in ‘Romeo and Juliet’; Two Gentleman of Verona‘; and recently, ‘Ajax in Afganistan.‘  In St Nick, Camila is a detective with a, ‘I’ve seen it all attitude’. Ho ho ho, how little does she know that this is one investigation that’s anything but open and shut. 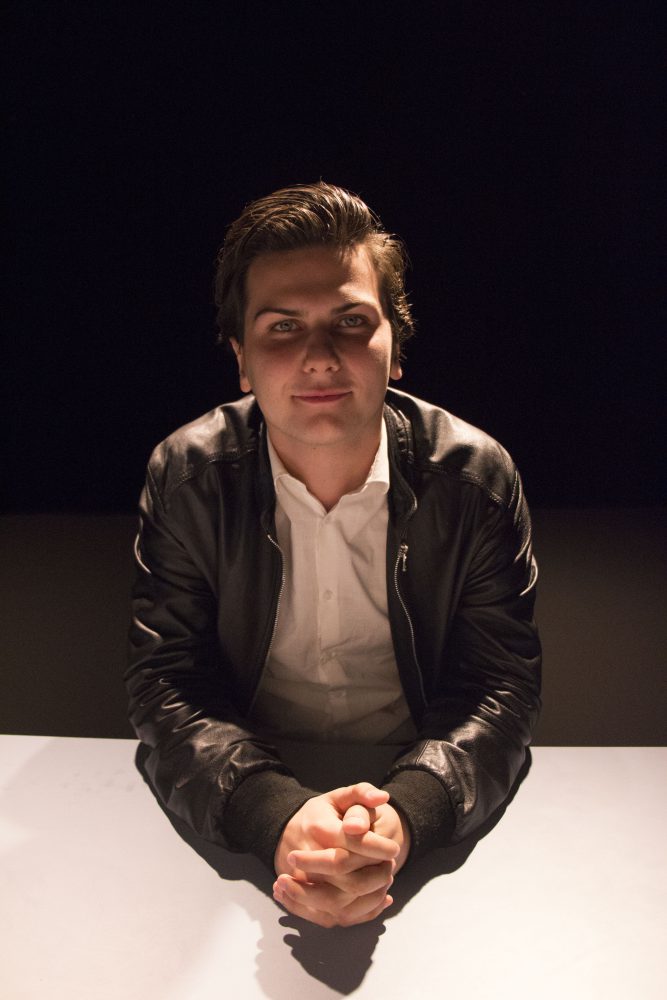 Alex is a NSW born actor who began his acting training at WAAPA in 2017. Stage highlights at WAAPA have included: Konstantin Treplev in Chekov’s, ‘The Seagull’; and Gabriel Law in Andrew Bovelle’s, ‘When the Rain Stops Falling’.  In St Nick, Alex plays a detective struggling to get his Christmas crime theory taken seriously. In the diligent cop/lazy cop team, Alex is a ‘man of ideals’ and the voice of humanity and reason.

Caleb graduated with a Bachelors of Media Arts majoring in Screen and Sound. For seven years he taught children in upstate New York all aspects of film making and live theatre Returning to Perth to do his Masters in Screen Studies at the WA Screen Academy, Caleb’s is making his directorial and writing debut with St Nick. He might have a first up home run.

Stephen’s screen industry career began 25 years ago.  He went to the ‘dark side’ taking various corporate roles until making a welcome return to the screen working as a researcher/producer for the Netflix original series, ‘72 Dangerous Animals Asia/Latin America’.  He’s returned to study as a writer/producer and to learn how to write a short bio.

Richard or ‘Toddy’ as he is affectionately known in the screen industry is one of  Australia’s most famed documentary filmmakers.  In recent years, ‘Frackman‘ and ‘Dying to Live‘ have kept him at the pinnacle of the observational documentary genre. His many achievements include a 2018 nomination for Best Direction at The Australian Director’s Guild Award.

Kaela completed an Advanced Diploma in Screen and Media (Digital Cinema) at TAFE. In 2019 she enrolled in a Bachelor of Media and Communications at the WA Screen Academy, specialising in producing, editing and sound. Kaela as you can guess, is very clever. She is excited to tackle the unique and uplifting St Nick and bringing her own original stamp to it.

This musician turned filmmaker earned an Advanced Diploma in Digital Cinema and is now studying for his Bachelor in Screen Studies, specialising in sound and editing. His passion is composing & creating soundscapes with a focus on sci-fi and/or horror. With St Nick he has all that, plus fantasy, mystery, suspense, drama and comedy.  He’s in for some long nights.

Jessica left WAAPA in 2016 with a Bachelor in Performance Making which was used to good effect in several quality theatre productions. Jess returned to Edith Cowan University in 2019 to study directing and cinematography for her Masters at the WA Screen Academy. Jess firmly believes milk and cookies are not just for Santa – cast and crew tend to agree. .

Meghan has been editing short videos of her favourite movies before she could walk. This later lead to TAFE to study film and build her editing skills to a professional level. In 2019, she’s is furthering her editing skills at the WA Screen Academy.  Meghan is looking forward to editing St Nick as the film lends itself to a whole new editing style and skill set.

Sean’s flirtation with the screen industry started at age 13, attending directing classes at Fremantle’s FTI’s summer school program.. However, the I.T. pay packet drew him into the machinery of the corporate edifice. Yet, the creative spark burned inside and he’s returned to studies to find the outcome of, “what if” he’d become a director and/or screenwriter.

If you haven't seen St Nick and the other WA Screen Academy/WAAPA short films you can go to the links below.  You can also vote for your favourite film.

I can announce that St Nick will premier with 5 other Screen Academy films, this coming Wednesday, 30.11.19  on Channel 9 Perth, starting 9:45pm.

You will have the opportunity to vote for your favourite Screen Academy short film of the six films (HINT-HINT!) So feel free to spread the word.  .

After that St Nick and the other films will be available to watch at your leisure on Channel 9's Catch-up channel   https://www.9now.com.au/shows

St Nick has also been accepted into a local Perth Czeck/Slovak film festival  - see below.  I don't know all the details yet but I will let you know.   https://www.lunapalace.com.au/coming-soon+1640+5th-czech-and-slovak-film-festival-2019

Many of you are owed rewards such as posters, digital copy of the film etc, you havent been forgotten I will follow that up in the next month

Thank you again for your kind support in helping us to make our little big film.

The day has arrived!  Tonight St Nick, with five other WA Screen Academy short films, will have its sold out premier at Luna Cinema, Leederville, Perth.  The WAAPA cast and Screen Academy crew will be joined by sponsors, screen industry professionals and friends/family.

Channel 9, Perth will broadcast the films later in the year. We'll keep you advised in advance of the date for the Channel 9 broadcast.

We haven't forgotten your 'rewards' and post launch we'll get onto the distribution of those.

Thank you again for all your support, you helped get us over the line.

We have completed virtually all our filming.  A terrific effort from all concerned.

We turned a few heads in a suburban Mt Lawley street when we recreated the Christmas feel complete with Christmas lights, a huge sleigh, flashing police lights, detectives, a wayward elf and of course Santa.  We also had a fabulous day at a warehouse in O'Connor with 40 extras and actors on set (adults and children) and almost as many crew.

We will soon be moving into our edit phase, which includes the music, which is all important in any Christmas story.

I can also announce that we have a Christmas hamper winner!  It was drawn by one of our child actors, Lucas, who unfortunately was sick on our filming day.  In true St Nick style, no one misses out, so Lucas had the honour of drawing the winner, which was Mick and Eva Pendergrast.

We will be working on fulfilling all your 'rewards' by late October.  Our gala launch of St Nick will be late September, followed by an appearance on Channel 9 Perth as one of the 2019 WA Screen Academy short films, and then onto the festival circuit.

Best regards from all the St Nick team,

To our fabulous supporters,

The entire St Nick team wish to thank you for enabling us to make our Crowdfunder target.  We can now lift our story to the standard we were hoping for.

We start filming this weekend!  We will also draw the winner of our Xmas hamper during a break in filming.  We will be in touch with you shortly regarding the redemption of all your rewards.

Once again we were very touched, heartened and uplifted by your support.

The St Nick crew and cast would like to say a huge thank you to all our supporters for you your pledges.    It is so much appreciated.

We have such high hopes for this film and everything you have contributed is enabling us to get the necessities to present ourselves and our story in the best light.

The priority now is our shooting schedule which starts on Saturday the 15th June through to Tuesday the 18th.

It has been really heartening to the WAAPA and Screen Academy students the support we have received from you.

To all our followers and supporters.  I big thank you for your donations and support.  I can't tell you how appreciated it is by the St Nick crew/cst.

What's apparent with a film like this, is that in order to make it as real as possible, costumes and props (from the big sleigh to the simple decoration) have to look the part.  We're sourcing as much as we can but there are a few props (you'll see it in the final film) that we have to pay for.  It's one of the outlays that your donation will go towards

Anyway, the sleigh is off and running and we just want to keep the momentum going.  So please don't forget to mention us to your colleagues and friends.

Blessings to you all,

WE’VE BEEN SITTING HERE FOR DAYS. START THE DAMN PRINCIPAL PHOTOGRAPHY BEFORE I PISS MYSELF!

$5AU
7 pledges
A raffle ticket to win our Christmas hamper.

Let's put a present under the tree

Blessed by an Elf

$25AU
12 pledges
Thank you for your donation!

Let's top up the stocking

Santa with a big heart

Jingle Bells - All The Way

12 tickets for the Christmas hamper draw

Three St Nick posters signed by the cast and crew

A special mention in the films final credits