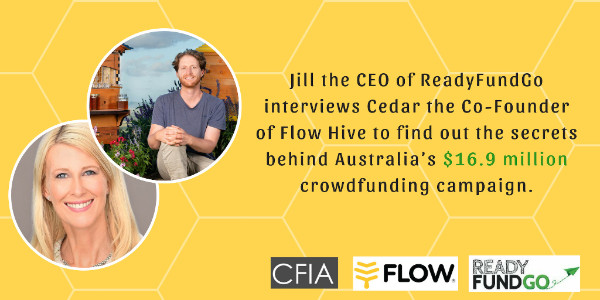 Three years on and Cedar Anderson and his father Stuart from Flow Hive, still arguably have the crown for the world’s most successful crowdfunding campaign ever.

ReadyFundGo is introducing a series of workshops, webinars and live events
More info

Not only did they raise a record-breaking A$16.9 million in just 6 weeks but they have now sold over 51,000 bee hives to 130 countries and, possibly even more importantly, they are inspiring a generation to care for our beautiful honey bees that are so vital to our natural world.

For those of you who do not know the story the Flow Hive journey started when Cedar said to Stuart, “There must be a better way to get honey from a beehive”. Ten years later after designing and testing and re-designing and re-testing the Flow Hive was born making harvesting honey easier for beekeepers and easier on the bees.

We are delighted that are part of the 2018 Crowdfunding Institute of Australia Conference Jill Storey, our CEO at ReadyFundGo interviewed Cedar to discover some of the secrets behind their most amazing crowdfunding campaign.

Jill has picked out the top 3 insights from Cedar to share with crowdfunding campaign creators. 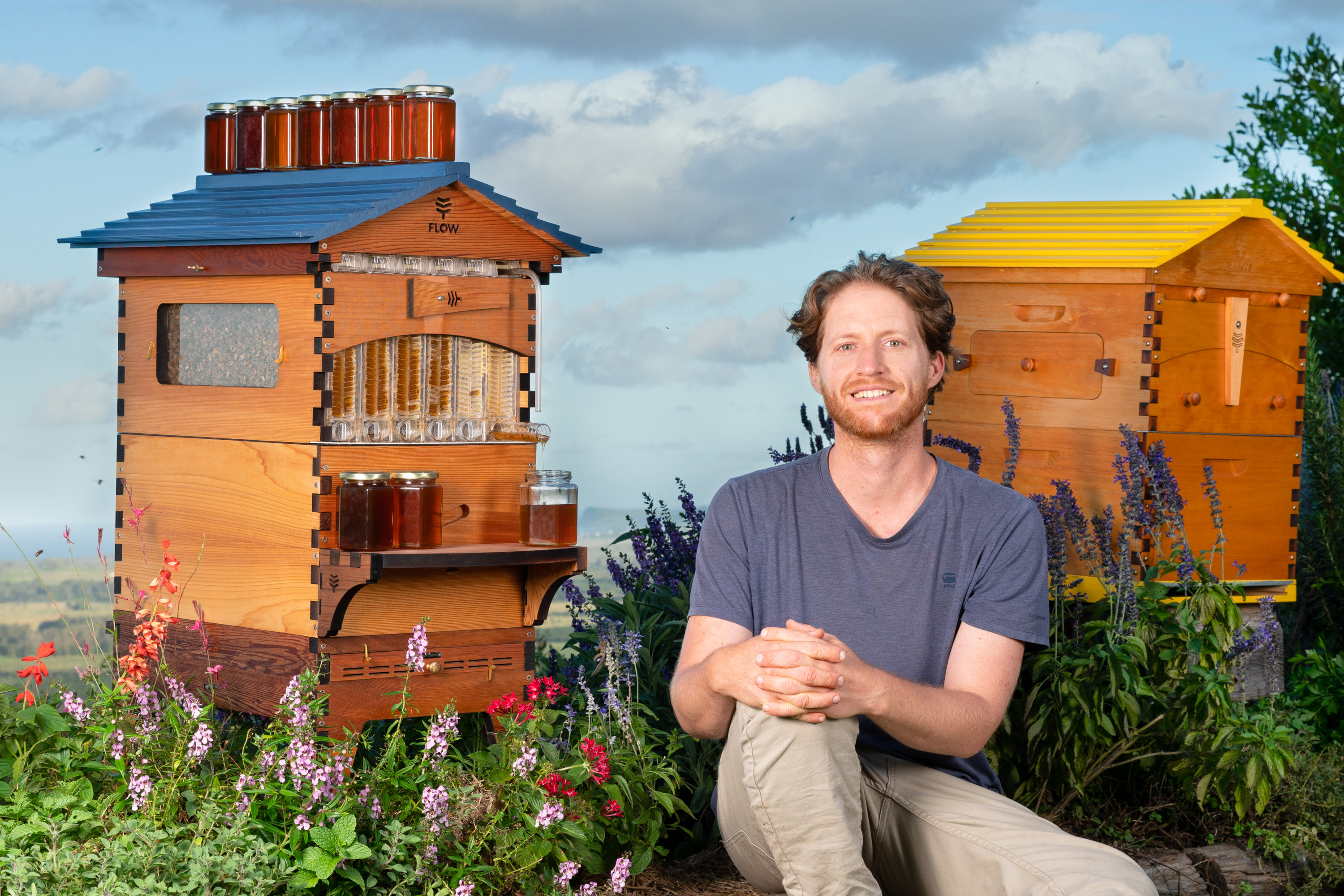 Cedar with the Flow Hive

Cedar was very clear in the interview that the video was the most important tool of the crowdfunding campaign.

A video is the window to your story and enables you to connect with people who know nothing about you. It is your way of generating excitement around your product and very crucially gaining trust from your backers and building your credibility.

Cedar told us that his sister was studying at film school at the time and she created their video. It took a year to make it. They built up footage of the different stages of their journey before it was cleverly cut to present their message in an authentic way.

At ReadyFundGo we advise campaign creators to start their video early in the creation of their campaign and not to launch without it even if this means delaying the campaign launch.

It is key to grabbing the audience’s attention in the first 15 seconds and clearly demonstrate the problem your product is solving.

It is a myth that you can create a crowdfunding campaign, launch it on a platform such as Indiegogo, Kickstarter or ReadyFundGo and your crowd will come. Every campaign is different, and it will have a unique target audience.

For any crowdfunding campaign it is important when you start that you know you can reach your own unique audience and that they will like your product. You need to create or find a community of raving fans.

In Cedar’s words“You need to create a snowball to create an avalanche”.

So what did they do before the Flow Hive campaign launched? Were they in touch with beekeepers and how important this was to the success of their campaign? 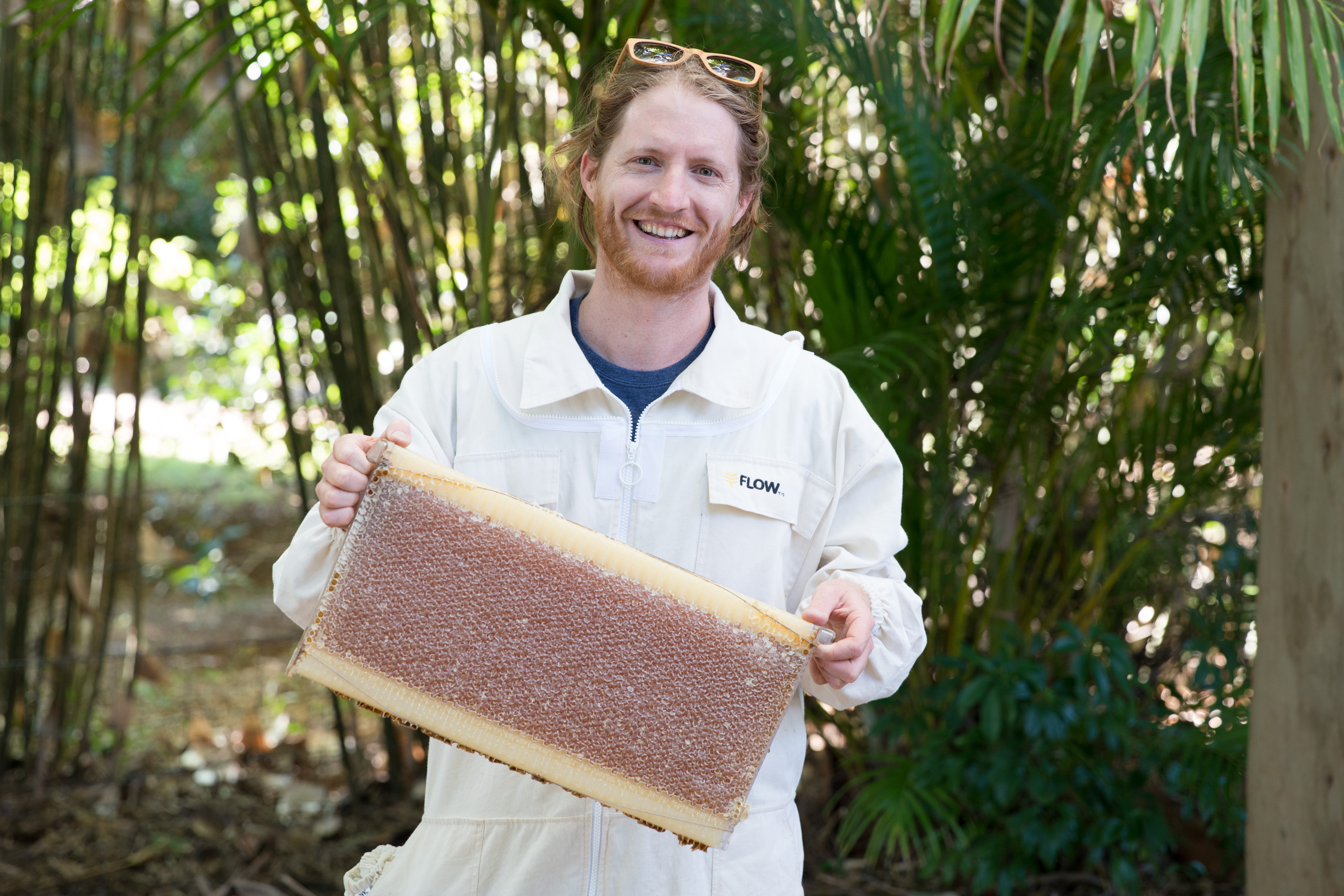 Cedar started off creating a Facebook page with an initial aim of getting 1,000 “Likes” before launch.

He then created a landing page and worked to get sign ups. Again Cedar set an initial target of collecting a 1,000 e mail addresses before launch.

Now this may have something to do with what happens when you have created an awesome product – a product that represents that largest advance in your industry in 150 years – but before launch they had collected a mind-blowing 70,000 e mail addresses!

Cedar told us that when their campaign launched there was such excitement and anticipation with beekeepers lining up to be the first to order the hives that they crashed the Indiegogo website twice!

At ReadyFundGo we find often the need to counsel campaign creators against being too keen to launch before they have done sufficient pre-work. Cedar and the Flow Hive team were very disciplined in their approach and waited until they had their sign-ups.

If you cannot persuade others to join your team for your crowdfunding campaign then you may not be able to create the crowd needed for a successful campaign.

Campaigns that are run by a group of people are typically more successful than campaigns run by one person.

During the interview with Cedar he talked about the Flow Hive team and how they all worked flat out to deal with the deluge of orders from around the world. It would have been impossible for one person to have dealt with their campaign.

Everyone has different skills and it is useful to add complementary skills to your team.

A group of people with different skills will usually come up with a better solution than one person on their own. Core teams behind some of the great crowdfunding projects tend to be made up of 2-5 key people.

If you are thinking about starting a crowdfunding campaign please e mail us  to obtain a FREE copy of the ReadyFundGo Guide to Crowdfunding.

If you are looking for a new hobby in 2019 or a special gift for a friend how about taking up beekeeping with a record-breaking Flow Hive? Cedar has very kindly offered a special discount to readers of this blog. To save yourself 10% on the revolutionary Classic Flow Hive, Supers & Beesuits use the READYFUNDFLOWcode. To claim, shop at www.honeyflow.com.au. Expires 5pm 24 December 2018.