Starting a new small business can be tough, but crowdfunding is an increasingly popular way for new and existing small business to get funding.  Here’s a look at how one woman in Brisbane, Australia has used crowdfunding to build her dream and break down barriers in numerous ways. 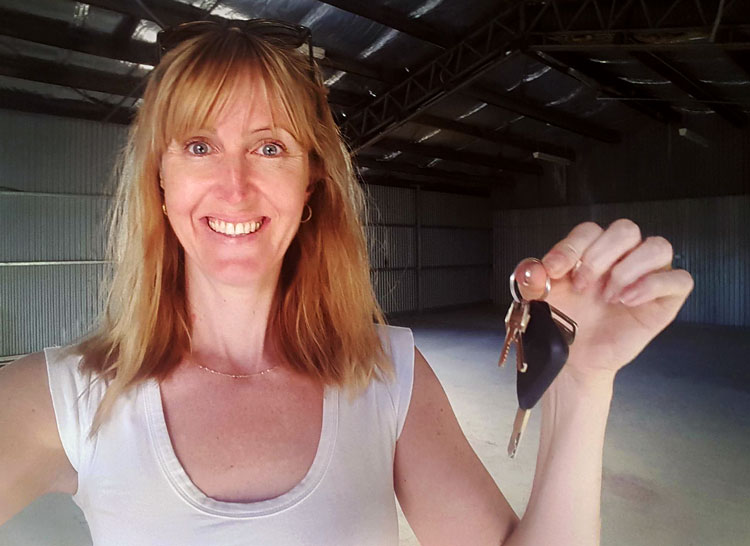 Meg Solly of SheSkills holding keys to her new workshop

At the SheSkills workshop in Brisbane, the sound of power tools and chatter fills the air as women practice their new skills of precisely cutting and sizing timber. Qualified tradies and crafters are here in the workshop, guiding the women as they get their hands dirty with practical skills. It’s a familiar sight now, these women engaging in their own projects in everything from vehicle maintenance to chainsaw operations.

With a focus on industries that are typically male-dominated, the SheSkills workshop encourages students to step outside their comfort zone and build the confidence to imagine, design and create great things. 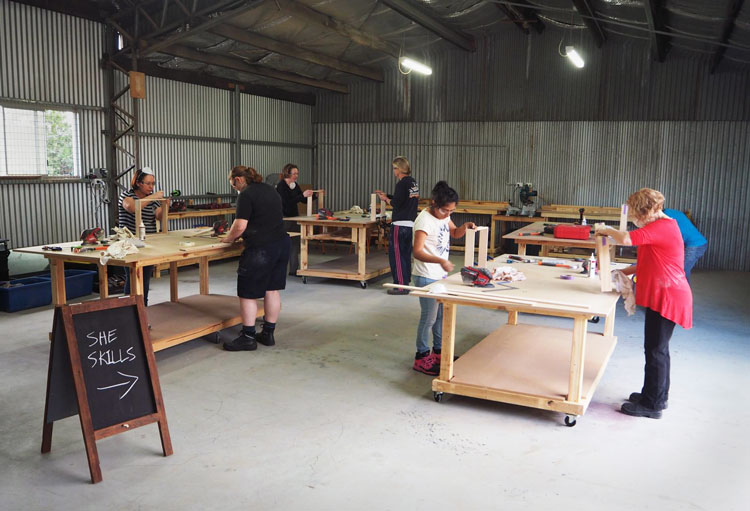 Meg Sollym, SheSkill’s energetic founder and creative director, is noticably at home amongst the power tools and students.  Meg holds a long list of varied experience including being a former singer, dancer, gymnastics coach, magician’s assistant, teacher, and HR manager safety advisor. She is also a passionate advocate for women’s rights.

The idea behind SheSkills came to her after having an experience that left her feeling like it wasn’t ‘her place’ to be working in what was essentially a man’s world. When she went looking for a truly inclusive organisation to teach her new skills, she then found that such a place didn’t exist.

The money raised through the crowdfunding campaign on ReadyFundGo helped secure the workshop space and launch Meg’s new business.  Importantly, a community with a shared interest and social cause was also enabled and strengthened. 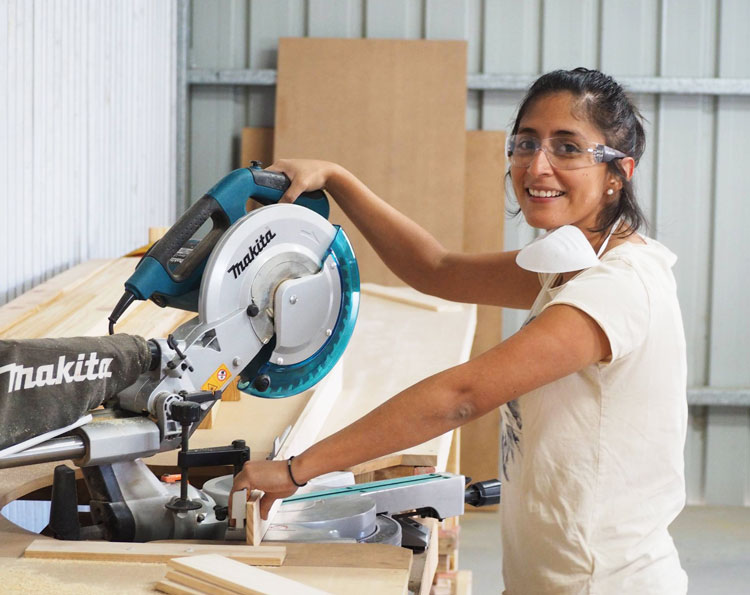 For those new to crowdfunding, crowdfunding is a way of funding a business or venture by raising money from a large number of people (“the crowd”). The crowd is made of individuals who each contribute a relatively small amount. The contributions are typically made through a web-based platform.

In Australia, most crowdfunding is rewards-based.  In return for a donation from fans of a project, the campaign creator typically gives some type of incentive for participating.

Globally, equity, real estate and peer-to-peer crowdfunding are some of the different types of crowdfunding that are popular. The Australian government have yet to pass legislation to open up equity crowdfunding, though there is indication that easing of regulations is on the horizon.

Most Australians have probably heard of crowdfunding by now, if not having already participated in it. It’s no longer a novelty of years past.

It’s been used by our Olympic athletes to fund their trips to Rio. It’s also introduced the world to successful innovations such as the ocean cleaning technology created by two Australian surfers. The Seabin, also called an automated rubbish bin for the sea, has seen global success in its aim to reduce rubbish in our oceans.

In fact, one of the world’s biggest reward based crowdfunding successes stories is an Australian story. The Flowhive campaign was created by a father and son from near Byron Bay, NSW. The two beekeepers developed a revolutionary way to extract honey from a beehive without destroying the hive. Their campaign has raised over $US 12 million to date, after an initial goal of $US 70,000. Some 35,000 people from around the globe have backed the project so far in support of their revolutionary beehive.

Reward-based crowdfunding, used by SheSkills and these other campaigns, can be an incredibly effective tool for launching or growing a project, business or innovation.

How small business and crowdfunding connect..

Most businesses in Australia are in fact small. Just over 2 million small businesses operate in Australia, which counts for some 97% of all businesses. While we tend to celebrate and value high-impact, fast-growth companies that attract massive global users and create thousands of jobs, clearly small businesses are a crucial component of the Australian economy.

When startups and entrepreneurs like Meg Solly try to create new businesses and jobs, banks often shy away. Or it necessitates red tape that is undesirable for a small startup. Australian Bureau of Statistics data indicates that small business loan applications are actually rejected at roughly twice the rate of medium-size businesses.

There has been much talk in recent years in Australia of making it easier for small businesses to access capital for growth.

Given their significant contribution the economy, it makes reasonable access to finance with appropriate terms and cost an important economic issue. It is also critical to improving Australia’s productivity and competitiveness.

Running a small business is not easy. According to the Australian Bureau of Statistics, more than 60 percent of small businesses cease operating within the first three years of starting. It’s an incredibly daunting figure and it’s something that’s thrown at many enthusiastic entrepreneurs who announce to the world that they’re opening doors.

One key reason for failure is that many small businesses fail is a lack of capital. Another factor is that they start with a bad idea — an idea that was never going to work.

Crowdfunding is the ultimate MVP engine (Minimum Viable Product). Entrepreneurs can use it to test their ideas on the crowd without significant financial costs upfront, while understanding their customers better. Crowdfunding in turn can provide consumers direct access to early stage products. Consumers give valuable feedback and create through their own marketing power the viral reach to new mass market products.

Opening up a product to community investment allows a social engagement that can put traditional social platforms to shame.

We’ve seen huge success stories of campaigners that talk with their audience throughout the production process of a new product. Using updates via email, social media and blogging, creators have built rabid fan base and sustained buzz far beyond their campaign close date.

Corporations have noticed this and are learning a lot from these campaigns. They’ve begun to see how to interact with customers at an early stage, practice storytelling and invigorate social media campaigns. The power of brands will push crowdfunding mechanisms even further.

How crowdfunding is bypassing old institutions…

An exploding crowdfunding sector is making billions of dollars of capital accessible to upstarts and entrepreneurs globally. 100s of crowdfunding marketplaces are democratising access to capital, fueling entrepreneurship and innovation.  Crowdfunding has also changed the face of philanthropy at an unprecedented scale and impact. It’s a nimble, bottoms-up model that is far more attuned to on-the-ground needs of changemakers and their communities worldwide. Its emergence resonates in the world we know it today.

Crowdfunding is viewed by many as a step closer to a sophisticated and practical expression of democratic ideals and values. For those watching its progress over the last 8 years or so, we’re seeing how it is helping break down cycles of poverty, stereotypes and inequality, one campaign at a time. 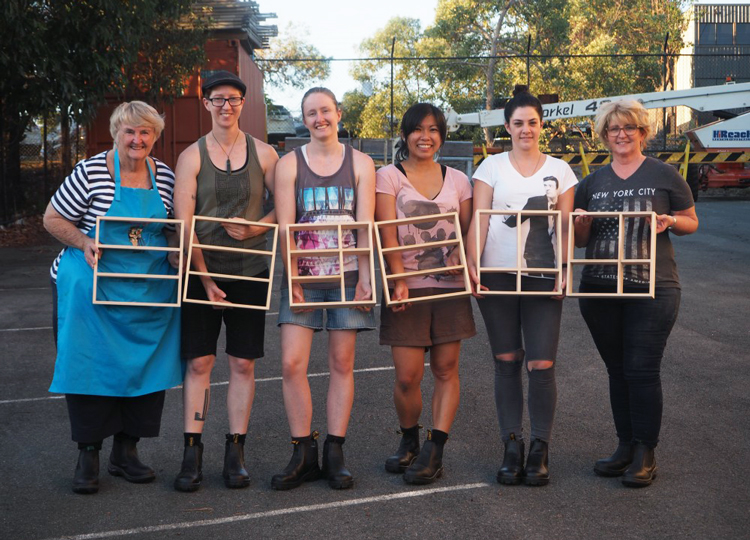 Today, a farmer in rural Kenya can secure the money he needs to buy a mobile phone to grow his business, with funds pledged from individuals from around the world. Crowdfunding is demonstrating that person-to-person connections are essential, while creating connections and stories that traditional institutions are hard-pressed to facilitate.

They create an ecosystem where funding is put towards entrepreneurial ends rather than mere consumption. This can create value for people rather than simply becoming a weight around their necks.

It’s easy to underestimate the impact of crowdfunding…

Some may dismiss crowdfunding as a simplistic way for do-gooders to easily support pet causes, that it is incapable of driving massive structural change that can improve prosperity for all, not just a select few. But the evidence shows the opposite is true.

Millions of people like Meg Solly are using technology and networks to secure finances for their startup and create social benefits.

Every technology revolution has its early adopters and its discreditors. The early adopters of crowdfunding are democratising access to capital and re-humanising our economy. For many it is a path to prosperity that lies in recognising the critical role that small businesses plays in establishing healthy and resilient economies. They understand that crowdfunding starts with individuals but quickly scales.

From an individual life changed, to their family’s and their staff’s, to their community, and beyond.